Sustainability Ideas in a nutshell 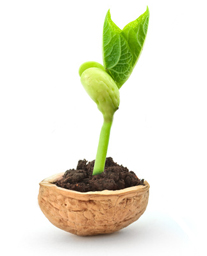 Perspectives on a New Economics for Sustainability

Challenge the prevalent use of economics that perpetuates the myth that we can grow our way out of difficulty.  Look at what can be drawn from innovative work such as steady state economics.

OK - here's a first stab at creating a template for the World Balance Sheet.  A lot of numbers to be filled in before we'll know if it balances!  "GSU" is an abbreviation for Global Sustainable Units.  This could be the Globo (as per the next item on this page).  I'm looking for a better term to use than "man-made" capital, to describe capital that is created by humanity rather than by nature - ideas about this are most welcome. 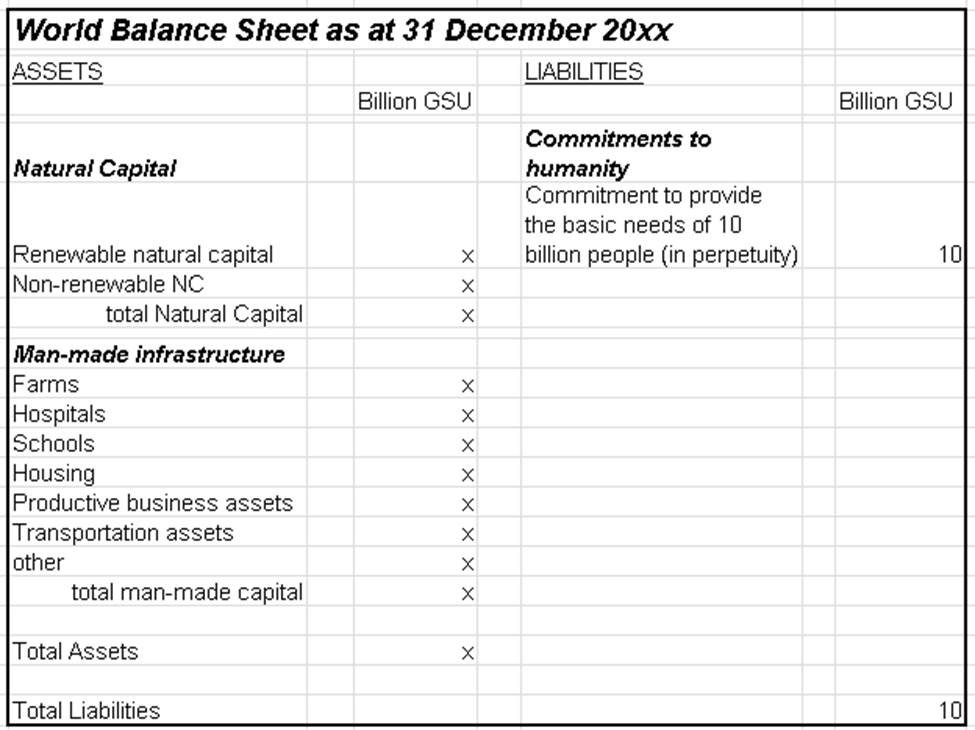 More about the World Balance Sheet at worldbalancesheet.com

​Having an asset-backed currency with a unit of sustainably managed land as the asset backing (without using a fractionally backed approach), would generate an incentive for beneficial actions, because the creation (or conversion) of (privately owned) land to sustainably managed land would in itself be a good thing while at the same time being wealth-creating for the landowner. Of necessity, governments or central banks would need to own (or control) significant reserves of sustainably managed land in order to provide this asset backing to their currencies. Not a problem to achieve in practice  – they already own much land and could always use compulsory purchase powers to create adequate levels of such reserves within a balanced economy and ecosystem.

This new form of currency, which one could call, for example, the "Globo" (drawing inspiration from the "Euro"), providing it was taken up by reputable governments and central banks, could provide all the benefits of being a medium of exchange and could also provide a store of value (overcoming some of the shortcomings of gold as a historical form of asset backing) while encouraging the maintenance (and expansion) of the stock of sustainable land which backs it. By the very nature of the finite supply of the asset backing, this currency would protect against the worst boom-and-bust cycles of existing economic cycles, by providing a stable and limited supply of the asset (and therefore of the money supply). It would also prevent a recurrence of the financial meltdown of circa 2008 and the fall of banks that happened at that time.

The Planetary CFO says that one way to improve the situation for migrants is for each global citizen to be auto-enrolled into a Global Welfare Insurance policy at birth.  The policy could be maintained by a global organisation such as the United Nations.  Premiums could be collected from every country in the world.  When any global citizen then moved between countries (for whatever reason) their entitlements to welfare under the policy would move with them.  This basic entitlement would be physical safety, shelter, water, food and healthcare and other medical support.
This approach would eliminate many of the current problems being experienced between countries facing the influx of huge numbers of refugees (and some so-called 'economic migrants') from places such as Syria.  One of the main difficulties being experienced by countries receiving migrants is the inability of their welfare systems to cope.  Hence the current debate (2016) in the UK about so-called "health tourism".  But if each citizen had the insurance cover, this problem would be all but eliminated. In fact, it wouldn't matter which country a particular migrant was in - the welfare provision would be funded anywhere.  And without welfare being a discriminating factor between countries, this would remove one of the supposed main drivers for people to move between countries - lack of these basic essentials for survival in the countries they are fleeing from.  What would be left as reasons to move would be the more advanced aims of finding a place to live where each person's life's aspirations and ambitions are most likely to be achievable.

An idea for dealing with Orbital Debris

NASA (and many others) have been worried about debris orbiting the Earth.  Not only does it pose a threat to the safety of astronauts, but much of it is human-generated and therefore is a sign we humans are littering and polluting parts of the Universe other than our actual planet.  More info can be found on the NASA website.

​I've recently heard some ideas about how to clear away such space junk, which included nets and scoops.  However, it occurred to me there might be a very elegant and non-polluting way of tackling the problem.
​Compressed air jets could be installed as secondary payloads in pairs on each side of spacecraft (or satellites) already planned for missions in orbits where there is significant space debris.  As they pass near each piece, they could adjust their orbit ever so slightly to bring them close to each piece of debris but to pass by on the side further away from the Earth.  Blowing the jets of air on both sides could push the debris towards the Earth, with an effect planned to be just large enough to alter the debris' trajectory so that it enters the atmosphere and burns up.  Because the air jets are in pairs, the craft delivering the air blasts would not be moved out of its orbit.  Even better would be for a planned imbalance in the jets to move the craft into a trajectory towards its next space junk target.